While many women have a valid fear of men, this too easily fuels the violence that people like me endure, writes Joyline Maenzanise

“Why do you dress like a man?” my colleague asked me one day when we bumped into each other in the bathroom.

We were in the same team at an investment management company and had been working together for several months at that point. Our desks were one person apart from each other. She caught me off guard that day — I had been feeling pretty confident in my look until that moment.

Before joining the company in South Africa, I had been worried about the corporate dress code and was relieved when HR reassured me that I could rock my trousers, matching shirts, and ties or bowties to work. Everyone who knew me at the company got used to my signature look. At least that’s what I thought.

After the encounter with my colleague, visits to the bathroom began to feel somewhat awkward. I wondered if I made other women uncomfortable. With each trip, the feeling that I shouldn’t have been using the women’s bathroom became harder to shake off. I may have been masculine-presenting, and I still am, but I wasn’t and am not a man. Since we had no gender-neutral bathroom for people who don’t conform to the gender binary, using the women’s bathroom was the relatively safer option for me.

My colleague was the only person at work to question me about my gender expression, but she wasn’t the only woman to make me feel out of place in women’s bathrooms. In fact, I grew to dread using public bathrooms. Strangers lay their eyes on me and immediately see a man intruding into their space.

At work, I started using the bathroom for folks who use wheelchairs. There were two on all six floors of the building and I had only ever seen one person throughout the entire company who used a wheelchair. I felt less guilty about accessing this space than the women’s bathrooms, because I felt like I would be less of an inconvenience.

My gender expression means I’m also visible to cisgender men who, it seems, have a hard time peacefully co-existing with people like me. In societies where gender essentialism both informs and perpetuates the belief that certain traits are gender-specific, many men believe that masculinity is their sole preserve. Heck, women like my colleague also believe this. These men, propelled by their perceived power over everyone else, feel entitled to mete out punishments to those who defy gender norms, who they believe threaten the foundations of their manhood.

In a country like mine, Zimbabwe, these men can easily get away with harming those who defy gender norms and are queer, like me. Anti-gay laws, which are championed by queerphobic political leaders and uncontested by several human rights activists and defenders, leave queer folks vulnerable to hate crimes with no recourse to justice.

Even in countries where homosexuality is legal, LGBTQ+ folks continue to face queerphobia. South Africa, which was the first in the world to prohibit discrimination on the grounds of one’s sexual orientation, has some shocking examples. In March 2020, a lesbian was gang-raped by teenage boys who wanted to “correct her sexuality”. This woman is one of many lesbians in South Africa who have been raped and/or killed simply because they are a lesbian, and men wanted to remind them that actually, they are women whose bodies they are entitled to.

Stories of queer people being raped or killed because men wanted to teach them a lesson or “correct” them are as angering as they are fear-inducing. Being raped because I dare to openly exist is my greatest fear.

They project their valid fear of men onto me. I understand this, but I also know that this fear easily translates into queerphobia and transphobia and fuels the violence that people like me endure

Over five years after leaving that company and South Africa, I have grown into myself as a transmasculine non-binary person. This has been liberating and I celebrate my queerness. But I know that openly embracing myself isn’t without its risks, especially since I’m in Zimbabwe where I have no constitutional protection from queerphobia. Using my social media platforms and writing to fight for LGBTQ+ rights also means that I draw even more attention to myself, and this exposes me to online and offline violence.

Women also experience significant gender-based violence. It is estimated that nearly 35% of women worldwide have experienced sexual harassment,1 but the true figure is likely to be higher due to the structural, societal, and familial factors that keep many from opening up about abuse. According to a survey conducted by the South African Medical Research Council, South Africa is reported to have the highest rate of rape in the world. Almost one in four men (23%) surveyed admitted to committing rape.2

It makes sense, then, that women feel hypervigilant about who is accessing spaces meant to be used by them only. When a masculine person like me enters what is their safe space, their antennas go up because they see a man: a potential predator. They project their valid fear of men onto me. I understand this, but I also know that this fear easily translates into queerphobia and transphobia and fuels the violence that people like me endure.

Maybe I just tell myself that women are projecting their fear onto me, to make it easier for me to accept the treatment I often receive when I have no choice but to use the women’s bathroom. Still, if I can, I avoid using public bathrooms. Whenever I’m out, I keep myself from consuming lots of fluids. This way, I know I spare myself the embarrassing encounters where my gender is questioned, and I’m subjected to intrusive stares as people try to figure out if I am a woman or not.

On top of minding where I pee, I also watch my step as I navigate life as an openly queer, transmasculine person living alongside violent men. At the end of the day, I still know that there’s only so much I can do to protect myself from being added to the number of people who have been violated because they dared to exist.


Featured image is an illustration of a transmasculine person wearing a matching shirt and bowtie, against a background of eyes, to give the sense that they are being watched and scrutinised 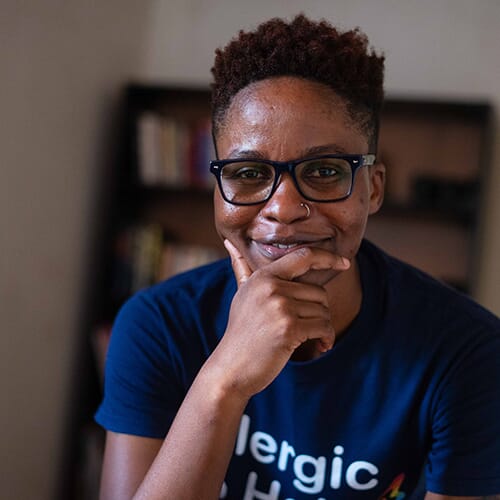