Going on the pill seemed like a no-brainer, except that I wasn’t informed it could impact my gut, writes Coralle Skype

I wasn’t nervous when I first went to get the pill. After all, I was finally taking control of my heavy, painful periods and now I’d have protection against pregnancy. I was 20 and not in a position to get pregnant.

The nurse mentioned the possibility of side effects but assured me that they’d be mild. Just a few days in, I started experiencing them and wasn’t prepared for what followed.

Over the coming weeks, I experienced severe bloating, loss of appetite, hunger pangs, constipation, emotional outbursts, irritability, and more. This went on for 3 months, and I assumed that the specific brand of pill just wasn’t agreeing with me.

So, I went back to the nurse, who suggested that I try the mini pill instead.

But the side effects didn’t wear off – they got worse. After 2 weeks of extreme bloating and struggling to go to the toilet, I gave up and stopped taking the mini pill. I felt disappointed that the pill wasn’t right for me but hoped that I would start feeling better soon.

The doctors brushed this thought to one side. They told me that the pill couldn’t possibly be linked to my symptoms

Unfortunately, that wasn’t the case. A few days passed and I continued to feel bloated and nauseous, getting full after eating small amounts of food.

I also hadn’t been to the toilet in 3 days. I frantically searched the internet for answers and came across an article that suggested this could be caused by an imbalance of bacteria.

This was the first time I’d heard that the pill could be linked to a bacterial imbalance, and potentially even gut health.

That day I went out and bought some probiotics. It did help a bit, but months went by and I still wasn’t feeling any better. So, I went back to the clinic.

I went for blood tests, external scans, internal scans, sigmoidoscopy, and I’ve lost count of what else. During this time, I lost over 2 and a half stone.

It was a scary time, and I couldn’t help but think that it had to all be linked to taking the pill. But of course, the doctors brushed this thought to one side. They told me that the pill couldn’t possibly be linked to my symptoms.

But they were wrong. I was recently diagnosed with small intestinal bacterial overgrowth (SIBO) via a private breath test. There aren’t many studies looking into the connection between SIBO and hormonal contraception, but there are plenty of stories posted online that describe a link between the two.

While more research is needed on this front, it appears that in some people, the synthetic hormones in the pill can slow down gut motility and gastric emptying,1 which can lead to an overgrowth of bad bacteria in the small intestine.2 When this bacteria gets out of control, it can cause a lot of digestive distress.

But it’s not just digestive symptoms, either. Most days I experience brain fog, fatigue, excess mucus in the throat, muscle aches and shortness of breath.

I’m currently treating my SIBO by following the LOW FODMAP diet alongside supplements and working with a dietician. But it’s going to be a long road to recovery.

I know my experience isn’t an extremely common one, but I still feel let down by my doctors. I wonder what could have happened if the nurse had had some awareness of SIBO and the possible connection — would she have told me to stop taking the pill as soon as I experienced severe side effects? Would she have suggested a probiotic to prevent dysbiosis (bacterial imbalance) of the gut?

If I was taken seriously, would I have had to go through months of feeling bloated, nauseous, and exhausted?

I felt like my concerns were thrown to one side, as if I was merely overreacting. I can’t help but wonder: if I was taken seriously, would I have had to go through months of feeling bloated, nauseous, and exhausted? Would I have been spared all those hospital visits and tests?

Some people will take the pill and feel fine, while others could have an experience like mine. We should all be aware of the risks of any medications we’re taking, and no-one should have to put up with debilitating side effects. 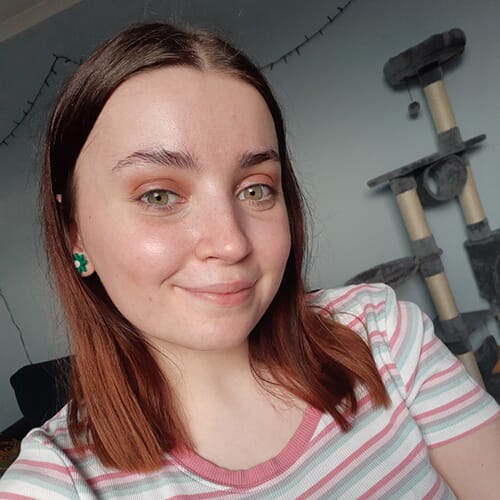 Coralle Skye is a 24 year old writer with a passion for women’s health and sustainability. She currently writes for Giddy, Daye, Flux Undies, Introvert Dear, and more. When she’s not writing, she enjoys spending time with her kitten and partner, delving into a book, or catching up with her favourite TV shows.