‘This Asian can’t fit’: Inside the Chinese culture of fat shaming

Naomi Chui walked into a clothing store in Hong Kong and found a rack of clothes labelled “Fit for all Asian body types”. But when the 19-year-old rifled through the rack, she quickly discovered it only had clothes in sizes S and M – hardly fitting of her plus-size frame.

“Well this Asian can’t fit it,” she remembers thinking. “Where do I fit in if I don’t fit in with my own race?”

Unfortunately, that wasn’t an isolated incident. Some stores in Hong Kong don’t even carry XL sizes and when Naomi would try on clothes that didn’t properly fit her, she’d rather leave the shop empty-handed then ask for a bigger size.

Naomi’s experience is just one example of how prevalent fat-shaming is within Chinese society. Recently, a leading supermarket in China apologised for displaying a size chart that labelled women who wear sizes L and up as “rotten”, while describing those wearing M as “beautiful”.

Fat shaming in Chinese culture has long been passed down from older generations – particularly from mothers to their children.

“They’d say that I have a really big appetite and make remarks about having to order extra dishes for me, but still expect me to eat everything on my plate”

Plus-size Chinese-Swedish comedian Evelyn Mok was a baby when her grandmother held her, tugged her skin and told her mother that she was going to grow up and be fat. Now 32, Evelyn knows that her mother’s constant criticisms of her weight were a product of her Chinese upbringing.

“She would spend time looking in the mirror worrying about looking fat,” she says. “And it broke my heart to realise that my mum’s a victim of fat shaming and never really recovered from it.”

Growing up, Evelyn wanted to act professionally, but couldn’t fathom ever being cast in a lead role. “In my mind, I’ve always cast myself as the ‘funny best friend’ and that’s because everyone I saw was slim, white, and conventionally attractive,” she says. “I chickened out of auditioning for drama school because I thought I wouldn’t get in, because I’m a plus size Asian woman.”

Like Evelyn, Naomi was pressured to lose weight from an early age. As a child, she would receive the same sort of prying comments from older family friends and relatives at dinners. “They’d say that I have a really big appetite and make remarks about having to order extra dishes for me,” she recalls. “But still expect me to eat everything on my plate.”

Throughout her adolescence, she avoided carbs and tried intermittent fasting, distorting her perception of her body.

When I was 11, a friend’s mother told me I had “chunky” thighs and that my body was getting “muscular”. And as a teenager growing up in Hong Kong, I developed a disordered relationship with body image that led me to skip meals so that I could fast-track myself to slimmer thighs.

Early life experiences play a role in how you perceive yourself and can possibly lead to body dysmorphic disorder (BDD), which affects roughly 1 in 50 people.1 While no studies have examined the prevalence of BDD across cultures, case studies suggest that its clinical features are generally identical worldwide.

Although BDD is felt globally, Asian communities lack awareness of it.

Born and raised in the UK, Natalie Cheung grew up hearing others within her British Chinese community express their desire to achieve “the perfect body”. “There’s always been dangerous diet pills and unqualified surgeries,” says Natalie, who has a podcast about the Asian diaspora. “It’s so normal to see influencers go on sponsored trips to Turkey to get a new waist.”

Mainly developed during adolescence, BDD is more than having negative thoughts about your body — people with the condition are preoccupied with their perceived flaws to the extent that this inhibits their day-to-day life. They may have repetitive behaviour and thoughts, like constantly checking themselves in the mirror or picking their skin.

Some people with BDD can’t bring themselves to look into the mirror or take a selfie, says Dr Yalda Jamali, a cosmetic surgeon who screens her patients for the condition to ensure the procedures requested don’t damage their mental health. She shares an anecdote where a person she suspected to have BDD wanted a complete nose restructuring to remedy a minor asymmetry. NICE guidelines note that those with mild disfigurements or blemishes seeking cosmetic procedures are at a higher risk of BDD.2

“I have to justify my position because everyone thinks that I shouldn’t be OK with myself. It’s extremely exhausting because it takes so much energy and strength to battle that every day”

“It’s not uncommon for patients with BDD to also have an eating disorder,” says cognitive behavioural therapist Hinal Patel. “There needs to be a greater understanding that plus-size women are also healthy. This is why advocating for body positivity through diverse representation is important.”

The roots of fat shaming also go back to an older Chinese generation’s way of thinking. “Your appearance and behaviour are always seen as a way to attract a husband,” Natalie says. “It’s a gendered expectation of what women are supposed to be like.” It doesn’t help that popular Korean dramas often cast slim, light-skinned women, while in Hong Kong, it’s not uncommon to see billboards with slimming advertisements that show lithe women dressed in extravagant gowns.

The East Asian tradition of respecting your elders also makes it hard for parents and children to recognise fat shaming as an issue. Negative criticisms about weight are normalised in conversations and framed through the lens of caring and improving your health.

Evelyn still struggles with embracing her body, but this doesn’t stop her from living as a proud plus-size Asian woman. What frustrates her most is the challenge of existing in public space. “I have to justify my position because everyone thinks that I shouldn’t be OK with myself,” says Evelyn. “It’s extremely exhausting because it takes so much energy and strength to battle that every day.”

It took me a while, but through fashion and sport, I came to love my physique and stop obsessing over the size of my thighs.

Health is not a look or clothing size, and fat shaming is a cultural epidemic. If we want to stop it, we need to get rid of the idea that there’s such a thing as a ‘shameful’ body.

Featured image is an illustration showing a slim Chinese woman in the style of the adverts described by the author — thin, grinning, light-skinned. She is coloured in and surrounded by a glittery background. To her left is a plus-size Chinese woman, who is drawn only as a stencil outline — as if forgotten and unimportant to the scene 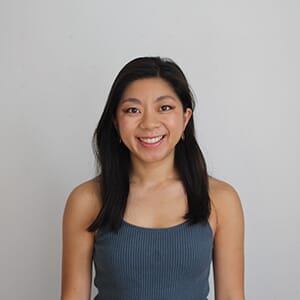 Natalie Chui is a London-based lifestyle journalist who writes about fashion, beauty, and culture. Born and bred in Hong Kong, her background is often reflected through her work, which focuses on championing emerging creative talents and diverse representation of womxn in all societies. Previously the Junior Fashion & Beauty Editor at Fenwick, her work has appeared online and in-print for Metro.co.uk, gal-dem, SCMP, Lampoon Magazine, Arcades Magazine, and CR Fashion Book.