I’m in a polished room in Kensington among a small sea of delegates across industry: healthcare, policy, education, finance, and more. The wood-panelled walls are slick and bookish and there are no fewer than six chandeliers shining down on us. Marie Le Conte, a political journalist who has written for the likes of the Guardian and Buzzfeed, is taking a quick sip of water before a panel discussion on how to engage youth in politics kicks off.

But I’m not at a symposium for youth engagement or outreach, I’m at just one of the day’s sessions at the ILC’s 2018 Future of Ageing conference. Here, ‘ageing’ has been reimagined as ‘longevity’ to counter the negative connotations that surround getting older.

A key theme of today, underscored by the inclusion of the panel I’m about to watch, is the value and impact of solidarity between generations — focusing on the universal needs of being human rather than the differences between ‘old’ and ‘new’.

This solidarity isn’t just essential on an interpersonal level but reflects a lack of consistency in social care and policy as people — particularly women — age.

Ageism is a double-edged sword

While ageism is often, and rightly, used to describe discrimination against older people, it is also used to disparage young people. It dismisses the abilities, opinions, and worthiness of young people while at the same time promoting an idealised version of ‘youth’ as the image people of all ages should aspire to. This image is so pervasive that it cuts older people almost entirely out of view.

But ageism doesn’t just oppress both groups, it pits them against each other. Society is experiencing palpable intergenerational tension that, ILC chief executive Baroness Sally Greengross notes, we have never seen before.

This is front-of-mind for the delegates watching the youth engagement panel. They raise the need for communication and knowledge sharing between the young and old, with ambitious words such as ‘innovate’ and ‘possibilities’.

As well as damage to interpersonal relationships, the idea that young and old have essentially competing interests informs broken social care systems that are failing older people.

Where the social care system stalls

Both younger and older people access social care, though not to the same extent. As of March 31, 2018, there were 2,209 children’s homes in the UK, marking a 3% increase on the previous year.1 About 1% of all children in the UK are in care, representing 73,000 children, while 50,000 are on a child protection plan.

Conversely, in 2015/16, three-quarters of all new requests to local councils for social care — amounting to 1.35 million requests — were made by adults aged 65 and over.2 Women make up 70% of the half a million people in the UK aged 90 and over.3

While it is true that both groups have different needs when accessing care, the idea that they are essentially different obscures older people’s need for human, compassionate support.

Social care plans for older people tend to be very process-driven: “Get them up, get them fed, and do it in this amount of time,” explains Care England chief executive Professor Martin Green OBE. When it comes to younger people, however, the plans include consideration of how they will be able to form and maintain meaningful connections with others and contribute to their community. These plans are purpose-driven and seek to nurture the aspirations of the person they’re meant for. While the social care system supporting children is by no means perfect, it looks at the factors that make up a complete picture of a person’s health beyond the simple fact of survival. As best put by Professor Green: “How do you give [older people] a life, rather than a service?”

With women making up 70% of people aged over 65 who live alone,4 it is essential that health and social care systems see older people as complex and complete human beings, especially as research shows that a lack of social connections is as damaging to our health as smoking 15 cigarettes a day.5

Janet Morrison, chief executive at charity Independent Age, calls for a reform of care systems to centre around five key values: learning, being active, taking notice, acting, and living. She describes a new model of aspirational care, that considers a patient’s needs beyond the simple fact of “getting them up”.

In the UK, the Care Quality Commission has rated 20% of care homes ‘inadequate’, with homes graded on whether their services are safe, effective, caring, responsive, and well-led. Only around a third of people aged over 50 are confident that older people who receive care services are treated with dignity and respect.6 There are currently 1.4 million older people with unmet care needs.

What’s the NHS going to do about it?

The NHS faces complex challenges not just to service the specific needs of an ageing population, but to function in the way it wants to at all. Austerity has affected not only the amount of funding available to the NHS but has put significant strain on its workforce to improve productivity. Founding Chair of NHS England Professor Sir Malcolm Grant outlines the NHS’ priorities in improving care for older people while putting the challenges it faces in context.

“It is possible to create a system that serves an entire population,” he says, admitting that while the NHS is far from perfect, it is working.

Plus, he notes, the true role that healthcare plays in life expectancy and longevity is quite small: our genetic makeup, followed by the environment and circumstances we are raised in, have a more significant impact. Where it comes to quality of life, however, compassionate care is essential.

With this in mind, Professor Grant outlines three key areas of focus for the NHS in meeting the needs of older people: ageing well, providing integrated personalised care, and enhancing health in care homes. While it should come as no great surprise, Professor Grant explains, that 23% of all deaths occur in care homes, 40% of emergency admissions coming out of care homes are believed to be avoidable. A focus on keeping people in the care home, rather than in an acute care facility, would see the creation of an enhanced primary care model and collaboration with pharmacists to reduce the amount of prescriptions given.

What needs to happen, however, is a nation-wide shift in how medical and care institutions view older people, and for this to translate directly into more empathetic and dignified care plans.

Bridging the intergenerational divide will take more than a panel talk, but it is a step in the right direction. Both sides feel disenfranchised for different, and valid, reasons, but until it is less difficult for both young and old to thrive in our society it will be even harder for people to listen to one another.

Featured image two hands making the shape of a house against a white background. The picture is in greyscale 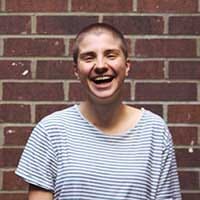 Monica is the Founder and Editor of The Femedic. Against a journalism background and after years of leading content marketing projects in the healthcare space, it became clear that health information out there for women simply wasn’t good enough. No-one had bothered to look deeper into the ways women were searching for information, or consider the depth of what they actually needed to know. Instead of waiting for the perfect publication to approach her, she created The Femedic.

Monica has been named one of The Drum’s 50 under 30 for influential women in digital 2018 and was shortlisted for Female Entrepreneur of the Year in the 2018 British Business awards. She speaks and writes widely on gender and health inequality.

Half of women report having “serious trouble” with contraception