As I swallowed yet another generic diet pill (washed down with orange juice, of course, as to help it absorb better), my mind wandered to the influx of outfits and on-trend pieces I would eventually be able to fit into, and all the attention that I would eventually start receiving from the opposite sex once the rest of the weight ultimately dropped off. By this point, I had lost four stone and was in a hotel bathroom in Barcelona for my 22nd birthday. People around me were congratulating me for losing weight and it felt good.

I carried out my daily morning heave, which had become something of a ritual at this point, popped on my bikini, and hit the beach.

This routine of bulimia combined with extreme food deprivation was a habit I learned from being made to attend Weight Watchers as a young teenager. There, I was taught to consume as few calories as possible (sometimes surviving on up to 600 calories a day), and I was congratulated on losing weight, with no one questioning my methods of doing so.

Each day consisted of me pre-weighing my cereal and milk before school, weighing my lunch to make sure it added up to the 350 calorie recommendation, cheating during lunch and having a Mars Bar, then throwing everything up afterwards in a bid to keep within my calorie goal in time for weigh-in at the next Weight Watchers meeting.

I carried out my daily morning heave, which had become something of a ritual at this point, popped on my bikini, and hit the beach.

The Weight Watchers programme taught me restrictive eating habits. I walked away with a binge eating disorder that went undetected for many years, in part because, for a long time, I didn’t think I had one. When I did bring up the possibility of having an eating disorder, no one understood or believed me, and thus caused caused me to question if I really did have one.

Approximately 1.25 million people in the United Kingdom have an eating disorder,1 according to eating disorder charity, Beat. Some of them are fat, too. Over the years, a disturbing misconception has appeared, fuelled by the media, that in order to be suffering from an eating disorder, you must fit into an ideal body shape. When people think of ‘eating disorders’, they normally visualise images of slim women starving themselves or forcing themselves to throw up. Images show visible rib cages, ‘lollipop heads’,2 and protruding spines, but this was certainly not the case with me, and many many other plus size people all over the world who have eating disorders.

It is true to say that most marginalised bodies, with the exception of cisgender women, are thought not to be affected by eating disorders. But the ugly truth is that eating disorders affect people of all ages, races, genders, abilities, ethnicities, socioeconomic statuses, and body shapes.

Many people still see the idea of a fat person who stops eating as someone who is ‘doing the right thing for their health,’ and our cultural view of fatness as inherently unhealthy plays heavily into that. Even now, I can anticipate the scores of people who will tell me that you can’t actually be anorexic if you are clinically ‘overweight’ or ‘obese’, since the clinical criteria for Anorexia Nervosa historically required you to be medically underweight.3

When people think of ‘eating disorders’, they normally visualise images of slim women starving themselves or forcing themselves to throw up, but this was certainly not the case with me.

Research has shown that medical professionals often miss eating disorders in overweight teens because of these inherent anti-fat biases.4 But I also know I’m far from the only fat woman to suffer from an eating disorder, and it’s time for people to see that bulimia and other similar disorders can affect more than just thin women.

I didn’t acknowledge my disorder until I was halfway through my self-love journey while seeing a therapist, who would question me on particular details on how I coped with bullying such as eating, self harm, and other things of that nature. It was only when I described to her the many complexities of my eating habits that she made me aware of the serious issue I had surrounding my relationship with food.

Our cultural obsession with thinness and cisgender-normative beauty standards are deeply harmful to the psyches of all women, but particularly to fat women. Our bodies are beautiful and worthy of love just as they are, despite the ugly messages that are continually dumped all over them. And those of us who have struggled with that, and been through real and legitimate eating disorders, deserve to have our experiences acknowledged for what they are.

We must work harder to include more diverse narratives. Fat people can, and do, have eating disorders. Including them and allowing them to feel comfortable openly expressing their thoughts and experiences with illnesses such as anorexia and bulimia could make it easier for them to cope and recover.

I want to leave this article with a message to anyone reading this who has felt like no one would believe that they are struggling with an eating disorder. Please reach out! Your experiences are valid and important. You are important. Never stop trying and remember there are so many communities waiting for you with open arms to offer support. 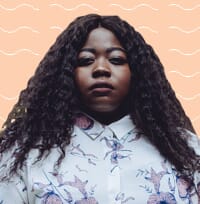 Stephanie is a London-based writer, influencer, and blogger, and is passionate about body positivity and fat acceptance. She has written for Stylist, Metro, and other publications. You can follow her on Twitter @NerdAboutTown.