In 2017, BBC statistics showed that black and minority ethnic (BME) groups faced cultural stigma over mental health conditions, and that white people were twice as likely to receive treatment for their condition than someone of black or Asian heritage.1

For those of us that come from BME backgrounds, these statements will come as no surprise. The reasons are complex, often reflecting the social, economic and cultural bias between communities within Britain. Two of the biggest factors affecting mental health treatment in BME groups are internal attitudes from within, and the relationship between health centres and their patients.

Stigma from within the BME community

Campaigner Asha Iqbal says her own anxiety was worsened by the fear of bringing shame to her family if she sought help. “There is so much stigma attached to mental health in communities overall,” says Asha, who has had anxiety since she was ten. “Talking about the South Asian community I’ve grown up in, you don’t tend to just deal with your friends or family views, but also the whole community as a package.”

The stigma is palpable across different BME groups and would-be patients constantly resist counselling or medication. Alice*, a 50-year-old British-Thai woman, experienced a period of low mood five years ago which she now accepts as depression.

As someone from a BME background, I can think of several occasions when people from within my own community have resisted treatments such as counselling or medication. There is some paranoia and scepticism around certain drugs such as antidepressants, and the fear that these drugs will play with one’s mind is prevalent in these communities.

“My family were worried, but my husband was also angry,” she says. “He wasn’t angry at me, but it was hard not to take it personally. He was angry that I couldn’t pull myself together or just get over it.” Her GP suggested that she go to counselling sessions but she refused because she felt like it wasn’t anyone’s business.

In the end she went back to Thailand to visit her family for a few months, and saw a doctor there who gave her antidepressants.

“I accept that I went through a depressive period, but I still haven’t told this to any of my friends,” she says. “I wouldn’t go to counselling but I’m aware of my triggers and avoid getting too bothered by things.” Why will she still not accept counselling? “It’s not in my culture or personality to share private business with strangers,” she says.

As someone from a BME background, I can think of several occasions when people from within my own community have resisted treatments such as counselling or medication. There is some paranoia and scepticism around certain drugs such as antidepressants, and the fear that these drugs will play with one’s mind is prevalent in these communities.

People of colour are also brought up with the view that personal problems must be kept private. Seeking therapy, that is, talking to an outsider, is the ultimate form of betrayal: airing the family’s dirty laundry in public is shameful.

Where does racial bias come into play?

This cultural ideology often leads to the perception that mental health practices are “something white people do”. This is furthered by the predominance of white therapists in the industry.

“Racial match, or concordance, has been described as one element of culturally responsive care and a potential factor in reducing mental health disparities for ethnic minorities,” reads one study on the subject.2 Despite this, another study showed that only 16.4% of the psychology workforce in America is from an ethnic background.3

Along with typical reasons such as therapy being too expensive and that admitting to anxiety, depression or stress is a weakness, this leads to dwindled numbers of BME patients.

In popular culture, shows such as The Sopranos or Analyse This also show therapy as the domain of white people. People from BME backgrounds are rarely given such storylines, ones in which people of colour struggle and triumph over mental illness, or where therapeutic intervention has helped their struggle and provided positive role models.

Because of this lack of representation, no one is challenging taboos which are so deeply ingrained in many communities. This problem of representation is, of course, part of the wider social commentary on white privilege and racial bias.

“There needs to be more work in educating about mental health, but also work needs to happen in services to engage with different communities.”

Women in particular also face the problem of being perceived as an unstable wife. “The problem is most services don’t understand the various cultural barriers that are faced by BME communities and how to adapt the way they deliver their service per culture,” says Asha.

In communities where marriage and reputation are paramount, a woman’s medical history often acts as a reference for her role as a wife. This is still the case for even British-born BME groups as these values are often passed on through families.

Other barriers to treatment that BME communities face

Alongside the conflict and tension cultivated from within communities, there are other factors preventing patients from accessing the care they need. Firstly, there is the issue of representation.

Institutions like the NHS were founded on a currency of privilege whether that was on class, gender or race. A fifth of nurses and midwives and a third of doctors are from a BME background, yet this figure falls to 4% in senior management grades.4 This means that those making the decisions are very rarely non white.

Even if they provide a public service, racial bias is still intrinsic. For example, in a 2003 report by the National Institute for Mental Health, it was noted that people of black African, Caribbean, and South Asian origin are less likely to have mental health problems detected by their GP.5 This is despite the fact that people from BME communities are generally considered to be at increased risk of poor mental health.6

Conversely, you have other cases when more, rather than less, scrutiny will be given to people from minority backgrounds, and assumptions will be made about their mental state. For example, in law enforcement, an assessment of detention due to the Mental Health Act 2007 found that BME groups were were more likely to be detained under the act than white people.7

Cumulatively, these extremes skew access to treatment and overall welfare. Most importantly, it taints the perception BME groups have of the institutions that should be designed to care for them.

What can we do to break down taboos?

The taboos are multi-layered and require considerable change within communities as well as among healthcare professionals in order to make any breakthroughs. “There needs to be more work in educating about mental health, but also work needs to happen in services to engage with different communities,” says Asha.

This is why campaigners such as Asha and her support group Generation Reform (www.generationreform.org) are so important in challenging the misconceptions BME groups attach to mental health and its treatment, as well as challenging the attitudes, unconscious and otherwise, on the part of doctors and healthcare providers.

Asha advocates the need for BME support groups in the workplace, and says these are the kinds of discussions needed if we are really going to change the experience of ethnic people, especially women, in our society.

What is key here is education and integration; from both sides working together to meet in the middle. In a world where the needs of BME communities continues to grow, we must find a way to stretch these social customs in order to accommodate the health and well-being of those most at need.

*Not her real name 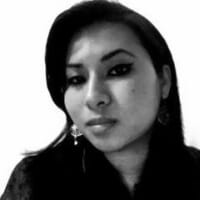 Christabel graduated from University College London with a BA in English Literature and an MA in Film Studies. Since then she’s been interested in capturing the narratives of everyday life. This has led to an interest in feminism, social issues, storytelling, philosophy, and cinema. She is currently working on writing projects, workshops and freelance ventures.