Women make up approximately 5% of the overall prison population in the UK yet account for a disproportionate amount of mental health issues experienced within the system.

In June 2015-16, 21% of all incidents of self-harm in prison were by women, while over twice as many women in prison (46%) reported having attempted suicide compared to men in prison (21%): a rate seven times higher than that of the general population.

This is partly because women in prison are often already predisposed to mental health issues, being more likely to experience life factors that lead to mental illness. A 2017 report by Prison Reform Trust found that the majority (57%) of female inmates had been victims of domestic violence, while 53% had experienced emotional, physical or sexual abuse as a child. Women said that police were rarely sympathetic or helpful and did not demonstrate an understanding of the dynamics of abusive relationships.

Failure to acknowledge this, and often to incorrectly criminalise in place of providing adequate care, creates a damaging status quo that extends into prison.

A quote from the most recent annual report from the HM Chief Inspector of Prisons for England and Wales captures this perfectly: “Some of the most vulnerable women are also some of the most challenging and their care is less well developed than it would be in a man’s prison.”

The Corston report in 2007 criticised the current criminal justice system and outlined the need for a more holistic approach, emphasising how gender-specific policies were needed to address the multiple needs of vulnerable women within the system. But, over a decade later, more than 100 female inmates have died in custody, with little change having been introduced since the report. Of the 93 deaths in women’s prisons between March 2007 and March 2018, 37 were self-inflicted.

While 70% of men and women who die from self-inflicted means whilst in prison have already been identified as having mental health needs even before getting to prison, the way they are treated once inside neither accounts for nor considers this.

In April 2016, 21-year-old Emily Hartley was found hanged in the grounds of HMP New Hall after being let out to exercise. This had been Hartley’s first time in prison, serving a sentence for arson after setting herself on fire in her bedroom, with her having shown a history of serious mental health issues. The jury heard that Hartley had self-harmed weeks before her death and had been bullied by prison officers. It took prison staff two-and-a-half hours to find her, even though she was meant to be checked on every 30 minutes.

Over a decade since the Corston report, these failures must be addressed. Women’s mental health charity Wish, who work with women in prison, held focus groups with women who have experienced the criminal justice system. Women shared how distressing it is for those who have been victims of serious trauma to then be locked up in facilities designed to silence and disempower them. What they said they needed instead was support in being rehabilitated in a system that responds to women’s specific needs, and highlighted the importance of proper staff training.

This support is particularly key when it comes to rehabilitation and women moving from prison back into the community. Former female prisoners are 36 times more likely than the general population to commit suicide within a year of being released. The 2007 Vision for Change report by NIACE and SOVA also found that one-third of people re-offend within 48 hours if left without support. That’s why Wish began our Community Link project in 2002, which supports women as they move from prison or a secure hospital into the community. We need more projects like these so women are not left with a gap in services, which then exacerbate their mental health issues.

We also need to look at whether sending women to prison is the correct action to take in the first place. The women’s prison population in England and Wales more than doubled between 1995 and 2010, with community sentences for women having fallen by nearly half in the last decade.

This is happening despite the London Assembly Police and Crime Committee finding in their recent report —’A long way from home: improving London’s response to women in the criminal justice system’ — that female offenders should be sent to support centres rather than prison. Almost two-thirds of women in prison are on short-term sentences for non-violent crimes, and sending women to specialist women’s centres to support them in the community, rather than sending them to prison, could not only be the answer to stopping the cycling of reoffending, but also to stop the current mental health crisis that exists in women’s prisons.

To find out more about the Women’s Mental Health Network, visit www.womenatwish.org.uk. And you can also fill out the current consultation form which is asking women to share their experience of the mental health system: womensmentalhealthnetwork.com/consultation/

Featured image is of a white brick wall with a metal fence in front of it. The fence extends to only halfway up the wall and has been enlarged and given a blue tinge for artistic effect 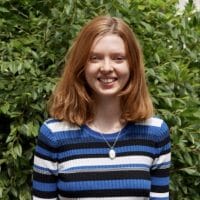 Jennifer Richards is an NCTJ-trained journalist and the Communications Officer at Women’s Mental Health charity Wish. She is also a playwright, with her work often reflecting her experience as a disabled women. Jennifer’s found how women’s bodies are typically dismissed as ‘too complex’, but has learnt how vital it is to understand your health and your body.