“When you’re on your period, at the very least you want a clean environment, you want pads that are comfortable, and you want the freedom to eat what makes you feel better,” says Grace*, a 43-year-old refugee from Uganda.

Grace sought asylum in the UK after facing persecution and sexual violence in her own country because of her sexuality. She now has refugee status and the right to remain in this country, but in 2015 she was detained in the notorious Yarl’s Wood immigration removal centre for seven months.

Described by the chief prisons inspector as “a place of national concern”, Yarl’s Wood is a Home Office detention centre run by private firm Serco. It houses up to 400 women, including refugees and asylum seekers, at any one time – ostensibly in order to deport them, but statistics show that three quarters of detainees, like Grace, are released back into the community to continue with their immigration cases.

In recent years, Yarl’s Wood has attracted a host of complaints and investigations following allegations of racist abuse and sexual assault, intrusions on detainees’ privacy, and a “culture of disbelief” amongst healthcare staff. For vulnerable women – many of whom have experienced torture, rape, or other forms of gender-based violence in their home countries – the arrival of their period can add to the trauma and indignity of being locked up.

Before she was detained, Grace already had problems with fibroids – non-cancerous uterine growths, which can cause heavy, painful periods – but in Yarl’s Wood, she says, they became unbearable. “The fibroids never really bothered me before – I used to feel sick, but the pain was never as bad as it got in Yarl’s Wood,” she says.

“After I was detained, the fibroids started getting bigger and bigger, I think because I was so stressed, anxious and depressed all the time. As they got bigger, my periods got worse. I felt very nauseous, very depressed, I’d get very sweaty and sleepless at night, and I’d have terrible period pain for a whole week.”

For her, sanitation was a particular problem. “There were days when I’d bleed so heavily I’d just want to stay on the toilet because I was in so much pain and bleeding a lot – but you can’t, because you’re sharing a bathroom. It’s not always very clean, and you can’t even get the pads you’re used to wearing,” Grace says.

“When I was outside, I used to buy pads that were comfortable, that I could wear and not feel like I was going to have an accident. In Yarl’s Wood there was never any problem accessing pads – they always had plenty in the office, but you had to ask and sometimes I’d feel uncomfortable if I had to ask a male guard,” she says. “Plus you have to use the pads provided; they’re cheap ones that are really uncomfortable. I got an infection sometimes because my skin reacted so badly to them,” she adds.

Even the food served up in the Yarl’s Wood canteen contributed to Grace’s monthly nausea. “The main food you’re living on is bread, and it makes you feel very bloated. For the first four days of each period I’d be throwing up, I couldn’t eat; I’d just stay in bed in really great pain. It’s terrible, it feels so nasty,” she says.

“Every month I would start worrying a week before I got my period and then, once it started, I’d be in bed all the time. I needed stronger painkillers but healthcare would only give me paracetamol, so I had no choice – I used to just lie down and suffer with the pain. Every month it got worse, for all those seven months I was there,” Grace adds.

33-year-old Nigerian asylum seeker Angela* was detained more recently, in autumn 2017, and also suffers from painful, heavy periods. “My period started in Yarl’s Wood, just before the Home Office tried to deport me,” Angela says. “It was a terrible time. I normally take naproxen for period pain, but I couldn’t get it from healthcare – they just gave me ibuprofen.”

When Angela was taken to the airport by a security team from Tascor, things only got worse. “I was seriously struggling with the pain, but they could only give me paracetamol every four hours, not my usual medication,” she adds. “They put handcuffs on my hands and a restraint belt over my tummy, and it was really pressing into my tummy, making the pain worse. I had to practically beg them to loosen it a little.”

Before long, Angela had soaked through her sanitary towel and asked to go to the toilet to change. But she was met with doubt and suspicion: “The guard said, ‘you’d better not be lying’. He told one of the female guards to go into the toilet with me to confirm I needed to change [my pad] because he didn’t believe me. She had to follow me into the toilet; I couldn’t even have privacy to change,” she says.

Angela’s deportation was ultimately cancelled, and she is now living in the community while she continues her asylum claim – but the humiliation of her experience is still vivid. “Your period is something that’s so personal, just for you,” she says. “Having them check on me like I’m a criminal or something was really embarrassing.” Tascor declined to comment on the incident.

Natasha Walter is the Director of Women for Refugee Women, a charity that’s campaigning to end the detention of women who seek asylum in the UK. “Women who are locked up in immigration detention often tell us that they are denied privacy and dignity,” she says.

“It’s very worrying to hear that women are treated in ways that they find humiliating and stressful around their periods. We need to ensure that all women who come here seeking asylum are treated with dignity. Detention is not only distressing for individual women, it is also entirely unnecessary – it’s much more straightforward, and actually less expensive, to ensure that women remain in the community while their claims are processed.”

Steve Hewer, Serco contract director at Yarl’s Wood Immigration Removal Centre, said they are “focused on dignity and respect in all aspects of our care at Yarl’s Wood”. He added, “We stock a range of sanitary products from high quality major brands and these are readily available for residents to take free of charge without the need to ask a member of staff. No resident shares a bathroom with more than one other resident and all shared bathrooms have locks on the doors for privacy.”

A Home Office spokesperson said: “Detention is an important part of our immigration system, helping to ensure that those with no right to remain in the UK are returned to their home country if they will not leave voluntarily.

“When people are detained, it is for the minimum time possible and detention is reviewed on a regular basis. Any decision to maintain it is done on a case by case basis but the dignity and welfare of those in our care remains of the utmost importance throughout.

“The Home Office has published guidance that provides information for our staff and suppliers on identifying and meeting the needs of women who are detained in immigration removal centres or under escort.”

*Names have been changed.

Many thanks to Women for Refugee Women, who supported Grace and Angela to speak about their experiences.

The image accompanying this article is a stock photo. 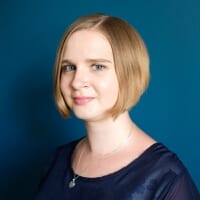 Sarah Graham is a freelance health journalist, specialising in mental health and women’s sexual/reproductive health. She was previously communications executive at Women for Refugee Women, and before that was Deputy Editor of Feminist Times. She’s particularly interested in exploring the areas where health and feminism overlap, from the health implications of gender inequality – such as abortion rights, male suicide rates, and the mental health impact of violence against women – to sexism and male-centric approaches in healthcare research and support.

We may soon have a pregnancy-like test for endometriosis

We need to hear, not dismiss, women seeking PCOS treatment

Are CBD tampons safe to use?

Tampon fibre shedding is common, but is it safe?

We need to talk about mental health and dysmenorrhea

Should we all use menstrual cups?

What is PMS and who gets it?

Why is the ‘nasty woman’ stereotype devastating for people with PMDD?

Should I take norethisterone? We asked women about their experiences

How does endometriosis affect mental health?

Why does it take so long to diagnose endometriosis?