Periods are different for everybody, but there’s a widely accepted ‘normal range’ for how many days they should last , how often they should happen, and how heavy they should be. Most menstrual cycles are 25-30 days in length, with a typical period lasting for 2-8 days and approximate blood loss of around 30-70 ml (5-12 teaspoons).1 14-25% of women of reproductive age experience some form of ‘abnormal uterine bleeding’. This can take many forms, including ‘spotting’, very heavy bleeding, irregular bleeding or bleeding lasting for longer than a period typically should.2

What actually counts as spotting?

The official definition of ‘spotting’ is slightly different depending on who you ask; the World Health Organisation defines it as ‘vaginal bleeding that does not require sanitary protection’, i.e. very light vaginal bleeding, but some studies on periods have defined it as ‘isolated bleeding days’ i.e. bleeding not associate with a menstrual period or bleeding which required one or no sanitary products to be used in a day.3 Spotting can appear just the same as regular menstrual loss — it can be red, pink or brown, and may be seen completely separately to the period, or during the days before or after.

Spotting specifically before your period may be normal; some women experience spotting as hormone levels begin to drop in preparation for a period. This usually occurs just two or three days before a period, but spotting prior to this is more likely to be a sign of a problem. It’s important to be aware of what is normal for you, this will make it easier to notice a problem.

Fibroids are extremely common, with more than 70% of women over 50 having at least one and three quarters of women having one at some point during their life.4 They are, by definition, tumours, although they’re non-cancerous (benign). They are tumours of smooth muscle found in the womb, and usually grow slowly although can end up being very large (occasionally bigger than 20cm).

Generally, multiple fibroids are present and the cause for them is not well understood, although it is known that their growth responds to female sex hormones (oestrogen and progesterone), which makes them rare before puberty and also means they’re likely to shrink after menopause.5

Fibroids are extremely common, with more than 70% of women over 50 having at least one and three quarters of women having one at some point during their life.

Many women with fibroids will have no symptoms at all, however some will have significant symptoms and these can be very variable. About 30% of women with fibroids request treatment for them.6 Symptoms can include effects on fertility, miscarriage, preterm labour or difficulties during labour. More day to day symptoms might include general discomfort in the pelvic and abdominal region, abnormal bleeding (including spotting before the period but also including bleeding which is heavier than usual or prolonged) and pressure symptoms like increased need to urinate, and constipation.7

Fibroids can affect fertility, pregnancy and labour. They can also cause urinary problems including symptoms of pressure or pain. The most common symptom associated with fibroids is abnormal uterine bleeding; this is often mild, but can sometimes be severe enough to cause anaemia.8

Why do fibroids cause spotting?

The reason that fibroids can cause spotting, or other abnormal bleeding, isn’t completely understood. There are lots of theories about this, including that hormones might be over-produced, leading to an increase in bleeding, or that the stretched womb lining over the fibroid(s) could mean that the veins are more fragile.9 Generally, symptoms regarding bleeding when it comes to fibroids are simply referred to as ‘abnormal uterine bleeding’, and while this encompasses spotting it also includes heavy and/or prolonged bleeding; symptoms vary from person to person.

If you have any of the symptoms associated with fibroids, or any other new worrying symptoms, including changes in bleeding pattern, abdominal pain or urinary problems, seek advice from your doctor or other medical professional. Diagnosis of fibroids starts with a detailed history and an examination, including a vaginal examination. Usually investigations will include blood tests and an ultrasound, if these are felt necessary. Depending on the results of this, you may be referred to a specialist.10

Treatment of fibroids depends upon the symptoms. If there’s any suspicion of cancerous change, or if the fibroid is growing particularly quickly, urgent referral to a hospital specialist is required. Fibroids which don’t cause any symptoms do not need any treatment, just yearly monitoring to check growth.

If fibroids cause very heavy bleeding, a number of treatment options can be tried, including use of a hormone-producing contraceptive coil (IUS), use of the contraceptive pill, NSAIDs (like Ibuprofen) or a medication called Tranexamic acid. If fibroids cause more serious symptoms, surgery may be considered, depending on a women’s preferences, age and general fitness. Surgery may include endometrial ablation, myomectomy or a hysterectomy.11

Generally, symptoms regarding bleeding when it comes to fibroids are simply referred to as ‘abnormal uterine bleeding’, and while this encompasses spotting it also includes heavy and/or prolonged bleeding; symptoms vary from person to person.

So who gets fibroids? Actually there are a huge number of risk factors, and as stated above, fibroids are extremely common. Fibroids are more likely to develop as women get older, peaking at age forty and then likely to shrink again after the menopause due to lower levels of reproductive hormones.12 Lots of studies have connected obesity with fibroids, and an athletic lifestyle may be protective, although this may be more to do with associated dietary differences. African-American women are more likely to develop fibroids, although the reason for this isn’t well understood. The association between fibroids and hormone treatments (both contraception and HRT) also isn’t well understood.13

Other causes of spotting

Missing a pill (or two) or even occasionally taking a pill a few hours later than you usually would, may also lead to some spotting. When spotting occurs shortly after starting a new form of hormonal contraception, it may be completely normal – your doctor or nurse should warn you about the possible side effects. If you’re experiencing spotting and you aren’t sure why, it’s always best to check with your doctor, even if you think there’s likely to be an innocent explanation.

Some women notice spotting when they ovulate each month (in the middle of their cycle); this is a normal variant of a menstrual cycle. Polycystic ovary syndrome is another known cause of abnormal bleeding, including spotting, although there are many other symptoms suggestive of PCOS which differentiate it from fibroids, such as acne, hirsutism, and weight gain. Some STIs can cause spotting, due to the fact they can cause the cervix to be inflamed (cervicitis), which increases the risk of it bleeding.16 Polyps, either inside the womb, or in the cervix, may cause abnormal vaginal bleeding, including spotting. Cancer of the cervix or womb is a much less common but very serious cause of abnormal bleeding.

There are also some causes of spotting and other abnormal bleeding which originate in places other than the reproductive system, i.e. bleeding disorders, which can make people generally more likely to bleed. 17 Other systemic conditions can lead to hormone disturbances with can cause spotting, for example thyroid disorders.

Although sometimes, spotting can be normal, or associated with something simple like contraception or medication, any spotting between a period is considered abnormal and you should always seek advice from your doctor or nurse before dismissing it. It’s generally useful to keep a diary of bleeding, including the days when you’re on your period, and also days where you have unexpected or unusual bleeding. The timing and amount of bleeding might help a healthcare professional to determine what is going on with your body.

Featured image is a person sitting on the toilet with their pyjamas round their ankles holding a toilet roll. The image is cropped so you can only see their knees, legs, and hands. 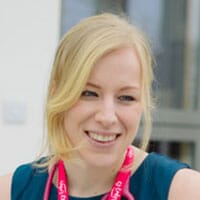 Evie is a foundation doctor currently based in Yorkshire, but planning to start GP training in Chelmsford in the near future. She loves running, cycling, and going to the gym, and is passionate about encouraging involvement and equal opportunities for women in sport. She believes it is hugely important for women to have honest information about their health freely available and be able to ask questions without fear of judgement.