Fact checked
This piece is Sponsored

Most women will agree that heavy periods can be a real pain, both literally and metaphorically. For some, they may have just got used to it, dealing with it each month in the way they know best. For others, however, constant heavy periods can be extremely distressing, or even a cause for concern.

The average woman loses around 35mls of blood during a menstrual period. To put this in context a standard measuring teaspoon holds 5mls of liquid, so this is roughly seven teaspoons. This doesn’t sound like much on paper, but the average sanitary pad holds about 5mls of blood, so this would roughly equal one completely soaked pad a day for a seven day bleed.

Heavy menstrual bleeding, or menorrhagia, affects up to a third of women of reproductive age, or 80,000 people in England alone, so it is actually very common.1 It is defined as losing more than 80mls of blood during a cycle, but some doctors prefer to take things on a case-by-case basis, relying more on your experience: what do you think of your period, and is it affecting your quality of life?

If the answer is yes, it is important to visit your doctor to see if there is a cause. There may be no cause, or it could be due to a hormonal imbalance, or a condition such as endometriosis, so it is important to rule these out first. If you do simply have heavy periods, there are a number of treatments which you can also discuss with your doctor.

What is the link between heavy periods and iron?

Excessive or prolonged menstrual bleeding can lead to anaemia in some cases. This is because when you bleed heavily, your number of circulating red blood cells are reduced. Iron deficiency anaemia occurs as your body tries to make up for the lost red blood cells by using your iron stores to make more haemoglobin, the protein that enables your red blood cells to carry oxygen to tissues. Women of reproductive age need more than twice as much iron as men, with recommendations standing at around 18mg a day, going up to 27mg a day during pregnancy, compared to about 8mg for men.2

All people who menstruate need to ensure they get enough iron, and this is particularly important if you bleed heavily during your period. If you notice signs of anaemia such as pale skin, weakness, and fatigue, you should visit your doctor just to rule out any other conditions, such as thyroid problems, and get advice on your next steps.

How do low iron levels affect your hair?

Another symptom of low iron levels or anaemia, and one that is less well-known, is that it can affect hair growth.3 Your hair cycle has three phases, anagen, catagen and telogen, with each individual hair at different points in the cycle at all times. The growth phase, or anagen phase, lasts 3-5 years, but in some it can last as much as seven years. After passing through the catagen phase, which lasts around ten days in which the hair root becomes weaker, hair enters the telogen phase, when your hair is released and falls out. Obviously, as each hair is always at a different stage in the growth cycle, if you are healthy it is unlikely you would lose more than about 100 hairs in a single day.

Currently, the exact role iron plays in hair loss is not entirely understood, although it has been proposed that it may be that hair growth is not vital for the normal functioning of the body, so if iron stores are low, hair growth is one thing the body will abandon in order to keep other functions running smoothly.

Certain things can disrupt the growth cycle, however. One condition that can occur after, for example, a stressful event, or pregnancy, is telogen effluvium. This is when the anagen phase is cut short and many hairs go into the telogen phase at the same time. Nutrition can play a part in this, so it stands to reason that if your iron levels are low you may be affected by hair loss.

Currently, the exact role iron plays in hair loss is not entirely understood, although it has been proposed that it may be that hair growth is not vital for the normal functioning of the body, so if iron stores are low, hair growth is one thing the body will abandon in order to keep other functions running smoothly.4

Studies have found that serum ferritin concentration (your body’s iron stores) is lower in people with female pattern hair loss (FPHL), and premenopausal FPHL patients (those still of menstruating age) had much lower serum ferritin than age/sex matched controls.5 A further study found that of nine patients with iron deficiency anaemia, eight had telogen hair loss, and concluded that women with iron deficiency status are at a risk of telogen hair loss.6

How can I increase my iron levels?

If you have ruled out anything serious with your doctor, and believe your hair loss may be due to low iron caused by heavy periods, you may wish to increase the amount of iron you are intaking. A good way of doing this is by adding more iron rich foods to your diet. Vegetarians need to be particularly aware of this as while plants contain a lot of iron, it is less easily absorbed by the body than iron from meat sources.7

Good animal-based sources of iron include red meat, liver, and shellfish, while those that don’t eat meat need to focus on eating dark leafy vegetables like spinach and kale, as well as fortified cereals, oats, and dried fruits like raisins and apricots. Certain vitamins and minerals have been proven to aid absorption of iron, including vitamin C (in citrus fruit, broccoli and potatoes), vitamin A (in milk, eggs, and fish oil), and beta-carotene (in carrots, sweet potatoes and kale),8 so make sure you are getting enough of these too.

The essential amino acid l-lysine has been shown to be important when it comes to hair health, and in one study women with increased hair shedding were shown to respond well to l-lysine and iron therapy.

If you do have a diagnosed iron-deficiency, your doctor may recommend you take an iron supplement in order to restore your iron levels and in cases of severe deficiency or anaemia, your doctor will probably prescribe you a specific form with a recommended dosage.

What other nutrients do I need if I want to tackle hair loss?

While the link between low iron levels and hair loss is well researched, evidence regarding other substances and their effect on hair is scant. Nonetheless, some links have emerged in some studies. Selenium proteins play an important role in many biological functions, and if you are deficient in this mineral it has been said to contribute to hair loss and even pseudo albinism.9 However, taking to much selenium can have the opposite effect,10 although getting too much selenium from your diet is rare.

The essential amino acid l-lysine has been shown to be important when it comes to hair health, and in one study women with increased hair shedding were shown to respond well to l-lysine and iron therapy.11 L-lysine is mainly present in the inner part of the hair root and is responsible for the shape of the hair and its volume, and it also helps your body absorb zinc and iron.

Finally, vitamin B12, also known as cobalamin, is essential in maintaining healthy cellular metabolism and red blood cell formation, and a deficiency has been shown in some studies to cause hair changes, such as premature graying.12 Having a true deficiency is a serious health condition, so see your doctor if you are having other symptoms.

There are supplements available that contain a mixture of the vitamins and minerals needed to optimise hair growth, including iron. So, if you are experiencing hair loss and heavy periods which don’t need specific treatment and aren’t affecting your quality of life, and have ruled out any underlying conditions, trying one of these can have beneficial results.

However, while supplements can replace the iron lost through menstruation, they won’t affect your periods themselves, so if your heavy periods are affecting your day to day life then it is important to visit your doctor to find out what can help.

Featured image shows a woman looking at the camera while running her hands through her hair. She stands against a dark orange background and the image is cropped so you can only see her arms and head. 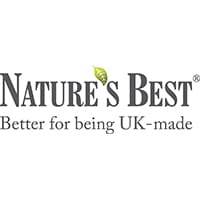 Nature’s Best have over 35 years’ experience in the nutritional supplement industry. With high potency products backed by science and consumers they have more than just an interest in health and wellbeing, they live and breathe it. From their extensive knowledge they have developed unique formulas to help support specific health problems, and as a result have researched the causes, symptoms and treatments. They hope that sharing this valuable knowledge with the public will help raise awareness and hopefully empower readers to live happy, healthy lives.