Can having sex on your period help with period pain?

Between 16 and 91% of menstruating women suffer from pain during their period.1 Painful periods (dysmenorrhoea) are the result of chemicals called prostaglandins being released from the uterus, which occurs in response to a natural drop in the hormone progesterone just prior to your period starting every month. Prostaglandins are responsible for uterus muscle contractions, which can bring on tummy pain and cramping. There are many well-known methods of easing this monthly lower abdomen pelvic cramping. Often, taking the over-the-counter anti-inflammatory medicine ibuprofen (this acts to counteract the effect of prostaglandins) is all it takes for the crampy pains to subside. Alternative common pain-relieving methods include cuddling a hot water bottle, hot baths or showers, wearing looser clothing, and exercise.

A lesser known method of pain relief, but a surprisingly effective one, is having sex. In one Masters and Johnson survey of women, 90% said they had no objection to sex during their period.2

Until 1972, when a bestselling book called The Joy of Sex: A Gourmet Guide to Lovemaking was published, sex during menstruation remained a taboo. Interestingly, this book features chapters in a food menu format, with sex during menstruation in the chapter referred to as a “main meal”, highlighting the importance of this ‘course’ in sexual relationships. The book’s author takes a positive spin on having sex during your period, and even suggests that menstruation is an opportunistic time to vary your sexual routine and explore new sexual activity, as during your period there is more natural lubrication present. For example, femoral sex (between the thighs) is easier to achieve comfortably during your period due to minimal friction.

Historically, general menstruation etiquette for women seemed to be, quite simply, don’t have sex during this time.3 Religious beliefs have also dictated behaviours related to abstaining from sex during menstruation and, in some areas of the world, women can still be excluded from society for the duration of their period.4 That being said, in other cultures, taboos surrounding periods and sex have almost been erased entirely, and many women continue to have and to enjoy sex while on their period.

How sex helps with pain

The scientific explanation for this is simply that the nerves don’t communicate period pain when women orgasm via vaginal stimulation.6 However, the mechanism of orgasmic pain relief is yet to be fully understood. We do know that noradrenaline levels increase significantly during orgasm, and with the corresponding rise in heart rate and blood pressure, blood flow increases to the genitals, engorging the blood vessels significantly at orgasm. There may be a pulsation in the vagina following orgasm, which is a direct result of the effects of noradrenaline. This noradrenaline-mediated achievement of reaching orgasm is what acts to inhibit the pain communication from the pelvic organs to the brain, and can last for up to an hour post-ograsm.7

The brain also releases the chemical messengers (neurotransmitters) dopamine, acetylcholine, nitric oxide, and serotonin, as well as noradrenaline, which are all involved in the feel-good, positive, endorphin-induced high we experience as a result of sexual stimulation and orgasm, enhancing our pleasure.8 Dopamine communicates satisfaction with sex via an area in the brain called the mesolimbic “reward” pathway, which is also involved in natural highs such as those experienced by drug use. Acetylcholine and nitric oxide are involved in genital lubrication, and increase in genital blood flow.

Other benefits of having sex on your period

Sex during menstruation is also a way to further improve bonding with your partner, and the thrill of doing something new may heighten your sexual experience.9 This enhanced bonding is mediated by the release of oxytocin and prolactin, hormones involved in the reward system during sex and orgasm.10

Another benefit of sex during menstruation is the fact that more blood may be released and shed. It is known that uterine contractions intensify during the oxytocin release triggered by orgasm.11 Due to powerful uterine contractions, prostaglandins (chemicals which cause the painful cramping) leak out along with uterine lining blood.12 Many women may find the duration of their period is shortened as a result of this.

But it’s also okay to not want to

In terms of sex drive fluctuations around the time of menstruation, every woman is different. Some women may report feeling a greater desire for sex just prior to menstruation, whilst others report that off-putting painful cramps act as a negative influence on their desire to have sex. It is also possible to simply not feel like doing much at all, and sex may well be off the menu due to heavy flow, feeling unattractive, and feeling concerned about bleeding on your partner. At any point in your menstrual cycle it is important to note that it is perfectly ok to only have sex if you desire it, and also it is ok to make sure having sex feels right for you at the time.

For women who experience elevated pain as a result of having sex during their period, then it is definitely wise to inform your partner and stop having sex. Having sex should not cause your period pain to worsen. It would be advised to take anti inflammatory medicines (such as ibuprofen), as it is likely required to ease your period pain, which could have been worsened by pressure on the cervix during sex.

For period pains which affect your daily life, including absence from work, you can seek help from your GP. Mefenamic acid is another anti inflammatory medicine, like ibuprofen, however, it is only available on prescription from your GP. It acts to prevent the production of prostaglandins, therefore, preventing uterus cramping.

Overall, sex during menstruation has many health benefits, including effective pain relief, greater bonding with your partner, and opportunities for variation in sexual activity. Perhaps the most obvious benefit is that there is a natural lubricant present. You don’t have to limit your sexual activity because you are menstruating, so take the opportunity to bond and experiment with your partner, if you are both happy and comfortable doing so. 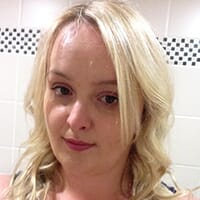 Lorna is a doctor by trade, and now works in the pharmaceutical industry. She enjoyed writing throughout her medical degree and she worked on numerous health-based writing projects, including medical research and writing articles for medical journals, while working as a hospital doctor for the NHS. She is excited to be able to reach a much wider audience with her writing for The Femedic and hopes readers will find greater clarity on health issues from reading her articles.

Different types of period cramp pain and what they mean