If you are a woman of menopausal age, you may well have experienced a hot flush, one of the most common symptoms of menopause. It is unique, and often the first symptom of menopause that women experience. Although flushes can occur with other medical conditions, the physiological changes that occur with a menopausal hot flush are different.1

A sensation of intense heat is the main feature of a hot flush. Individuals will experience temperature changes over a significant amount of their body, and this can persist for several minutes. The increase in skin temperature, which most women feel first, and strongest, is the result of blood vessels dilating.

The increase in blood flow precedes the sensation of the flush by approximately one minute, and then can last for a few minutes after.2 There is also a rise in heart rate at the same time, and some women do complain of palpitations accompanying their hot flushes.

There are many physiological factors that contribute to a hot flush. It is thought that menopausal hot flushes have hormonal causes, but the exact mechanism is unclear. One major theory states that in symptomatic women, the thermoneutral zone, which controls fluctuations in body temperature, has a reduced threshold.3

This means that small fluctuations in body temperature which would not normally cause a bodily response trigger the thermoneutral zone. It is thought that the reduction in threshold is caused a change in levels of oestrogen.4 The flushes don’t usually persist in the postmenopausal period.

What is black cohosh?

Black cohosh, also known as bugbane, black snakeroot, rattle weed, and wanzankraut, is a plant with white flowers, native to Canada and Eastern USA. It was initially used by Native Americans to treat a variety of medical conditions, including helping with childbirth and menstrual irregularities. More recently, since the 1980s, it is thought that black cohosh may have a beneficial effect on menopausal symptoms.5

Black cohosh contains a number of biologically active components and there are varying opinions about how it works on the body. It is thought that the isoflavone (a compound found in a plant that is biologically active ie. one that has a physiological effect on the body) formononetin stimulates oestrogen receptors.6

The results on hot flushes showed that black cohosh made no difference to the frequency and intensity of these episodes when compared with a placebo. When black cohosh was compared to HRT, HRT proved to be more effective at treating symptoms

However, other research has shown that the plant may act centrally via the brain.7 It is also thought that it acts by reducing luteinising hormone (LH), a hormone that rises during menopause and is released in pulses thought to correspond to when hot flushes occur.8 Finally, black cohosh is thought to stimulate dopamine receptors, a hormone that is involved in the brain’s reward and pleasure sensors.9

How successful black cohosh is in treating menopausal symptoms is up for debate. In 2010 a review concluded that menopausal women experienced a 26% reduction in night sweats and hot flushes when using black cohosh.10

However, a 2012 systematic review and meta-analysis of all the evidence on black cohosh and its effect on menopause symptoms concluded there was insufficient evidence one way or another, although this is partly as the data was incomplete and there were a lot of differences in the way each study was carried out.11

Nonetheless, the results on hot flushes, for example, showed that black cohosh made no difference to the frequency and intensity of these episodes when compared with a placebo. When black cohosh was compared to HRT, HRT proved to be more effective at treating symptoms.12

A 2016 systematic review also confirmed that there was no significant association between black cohosh supplementation and reduction in hot flushes.13

In terms of safety and side effects, women who have taken black cohosh have complained of breast pain, vaginal spotting, musculoskeletal pain and stomach upset.14 However, the same symptoms were reported by women who took the placebo in a lot of these studies.

There have have also been reports of liver damage. Although no causal relationship has been found between black cohosh and liver damage, it was presumed that the damage to the liver was caused by an incorrect species of black cohosh being used.15

However, overall there is insufficient evidence to establish a firm conclusion on the safety of black cohosh, and there is also very limited information about the interaction between black cohosh and other medications.

There are individuals who have not noted any side effects when using black cohosh for menopause symptom relief, even when taking the plant for as long as 12 months. However, overall there is insufficient evidence to establish a firm conclusion on the safety of black cohosh, and there is also very limited information about the interaction between black cohosh and other medications.

Can black cohosh help with other menopause symptoms?

There is inconclusive evidence to show whether or not black cohosh is effective at treating other symptoms of menopause, such as vaginal atrophy or bone health. One review reported no beneficial associations between black cohosh and relief of other menopausal symptoms.16

Given all the evidence, clinicians are very unlikely to recommend the use of black cohosh for the treatment of menopausal symptoms. There are other treatments available for hot flushes, which include simple lifestyle changes, or medications.

Simple measures you can take to reduce hot flushes include wearing light clothing, avoiding certain triggers such as spicy food or alcohol, taking a cool shower or having a cold drink, and acupuncture.

HRT is also very effective for relieving hot flushes. However, HRT is not suitable for all women, and you will need to discuss with your doctor to determine whether it is right for you.

Given that the evidence regarding the effect of black cohosh on hot flushes is inconclusive, it is best to discuss the use of black cohosh with your doctor before trying it as other, more effective, methods may be available.

Featured image shows a woman typing on a laptop sitting at a desk in front of an open window. You can’t see her face as she is sideways to the camera. 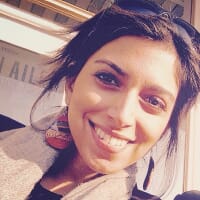