After receiving an “abnormal” smear test result, Zoë Smith went through a series of tests and procedures to assess and monitor her risk of cancer

Up until two years ago, getting a smear test was just another one of those slightly embarrassing and marginally uncomfortable obligations of owning a vagina — a routine inconvenience like periods, using contraception, or examining your breasts for lumps. But my last ‘routine’ smear test turned out to be anything but.

My test result was “abnormal”, which is a word no-one wants associated with any part of their body, least of all their cervix. This meant that HPV positive and abnormal cells were found in my cervix, and that I would be sent to a gynaecologist for a colposcopy — a procedure that examines the cervix — and a biopsy, where a small piece of tissue is removed for further examination.

The biopsy confirmed that I had abnormal cells (or “lesions”) caused by human papillomavirus (HPV), a common group of sexually transmitted viruses of which some can cause cancer. I’d heard of HPV, of course, but I still had numerous questions: How did I get it? Could I pass it on? Was I going to get cancer? Is it curable? Why me? My gynaecologist was quick to reassure me that HPV is incredibly common: approximately 80% of sexually active adults will get it in their lifetime.1 You don’t need to have penetrative sex to get HPV: it can be transmitted through any skin-to-skin contact of the genital area; vaginal, anal, or oral sex; or from sharing sex toys.

HPV is not cancer, but in some cases, it can develop into cancer. The good news is that some 90% of HPV cases clear up spontaneously within two years

There are some 200 different strains of HPV, many of which cause no symptoms. But some cause genital warts and others are responsible for 99.7% cervical cancers.2 It says a lot about the stigma of STIs that my first thought was, “Thank god, I don’t have genital warts”. Unfortunately, my HPV strain was one of those that can cause cancer.

HPV is not cancer, but in some cases, it can develop into cancer. The good news was that some 90% of HPV cases clear up spontaneously within two years.3 My cells were low-grade, so the best course of action was simply to monitor them. Cells are graded based on the degree of change they have undergone (from being “normal”) and their potential to be cancerous, with “low” representing the least risk. I was 33 years old, fit and healthy, and a non-smoker — and if, on the slim chance that the cells didn’t heal, the progression from HPV to cancer usually takes around 10-20 years.4 I had time. The odds were on my side.

My next smear test was due a year later, in March 2020, smack-bang in the middle of the Covid-19 pandemic, with the entire country in lockdown. My own health worries felt rather insignificant in comparison and after finally getting an appointment in May, I pushed it to the back of my mind until my doctor’s number flashed up on my phone.

A second biopsy confirmed that the cells had not magically disappeared. This time, it was my gynaecologist asking the questions, and he didn’t sound so optimistic: Did I have children, had I ever been pregnant, did I want children? He talked about the probability of having to operate and admitted there was a risk, albeit small, for the procedure to affect future fertility or my ability to carry a pregnancy to full term.

My gynaecologist asked whether I had any questions, but my mind was completely blank. I shook my head; I felt numb. After that appointment, I sat outside the hospital in my car, alone, and sobbed. I had so many different emotions coursing through my body that I didn’t know how to process them.

I was angry at my body for not fighting this virus like everybody else’s seemingly did. I was suddenly terrified how this would affect my fertility and even though I’d always sworn I wasn’t bothered about having kids, the prospect of losing that choice was like having the breath punched out of my lungs.

I felt ashamed to be fighting an STI, but simultaneously annoyed at myself for feeling ashamed – after all, it’s 2021, and aren’t women supposed to be past feeling shame over their sexual health?

Above all, I knew I was lucky. With my rogue cells under surveyance, the risk of cancer was still minimal. Still, in the midst of a global pandemic, I felt somewhat guilty — that I was dramatising my own non-life-threatening condition in the face of so much suffering. But in that moment, crying alone in my car, it felt like the world had stopped spinning.

The biopsy results showed that my grade 1 cells (low grade) had developed into grade 2 and grade 3 cells (high grade), which, if left untreated, had a risk of becoming cancerous. A further concern was that my smear tests kept coming back inconclusive, as if my body knew that it wasn’t following the rules and was trying to cover its tracks.

I went in for a conization (cone biopsy) surgery just after Christmas, which is where a cone-shaped piece of tissue is taken from the cervix to remove the affected cells. The operation was carried out under general anaesthetic and I was back home by evening. After months of worry and inexplicably bursting into tears at least once a day, the operation itself was much easier than anticipated. I felt strangely calm going into the operating room and the next thing I knew, I was waking up wearing disposable underwear and a large pad.

It’s now a few days after the surgery and the only aftereffects are some light bleeding and mild cramps – I’ve had periods far worse. I’ve been advised to refrain from any strenuous activity or sport for at least a week, and avoid tampons, baths, and any sexual activity until my follow-up appointment at the end of the month.

Only time will tell if the surgery was successful. The prognosis looks good but removing the cells does not always remove the HPV and if my body still doesn’t clear up the virus, there’s no guarantee that further cellular changes won’t occur. At best, I’ll still have to wait another year in the hope of getting a ‘normal’ smear test result again.

One thing’s for sure: if I’m ever lucky enough to go back to those routine once-every-three-year smear tests, you can bet I won’t be complaining about them anymore. I won’t be putting them off or procrastinating in getting them done, either. If I went from a normal smear test result to being operated on within less than five years, I can’t help but wonder what might have happened if I’d missed one.

Cervical Cancer Prevention Week is 18-24th January 2021 and seeks to raise awareness of the importance and efficacy of preventative measures against cervical cancer. Of these, attending your cervical cancer screening appointment is considered the most important.

It can be scary and upsetting to receive an abnormal test result, but in most cases, this does not mean that you have cancer — instead, this gives your doctors the chance to treat and monitor any cervical cell changes before cancer can potentially develop.

Featured image is an illustration of a person with a vagina reading a letter. It is a line illustration in black and white, with only the person’s torso visible. They are holding the letter in their left hand and holding their right hand up towards their face, as if biting on their nails nervously. The background is five watercolour stripes that fade from pink, to purple, and to blue 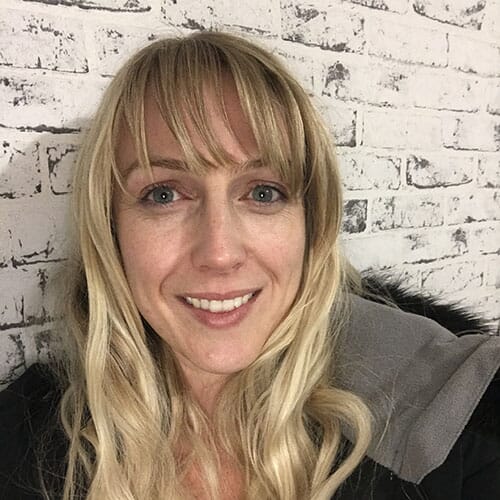 Zoë Smith is a freelance travel and lifestyle writer and content creator who has written for the Telegraph, Rough Guides, CNN, and TripAdvisor. She is also editor-in-chief of Intelligent Horsemanship magazine and digital editor for FrenchEntrée. Zoë lives in France, where she writes about the British-French experience at her blog, Râler Like a French Girl.