Heavy menstrual bleeding is defined as excessive menstrual blood loss, which interferes with a woman’s physical, social, emotional, and material quality of life.1 The medical community has moved away from defining the amount of blood lost; it’s a very personal definition because differing amounts will feel normal for different women.

Usually, women who complain of heavy menstrual bleeding find their periods can be so heavy that they soak through several pads every hour for all of the days that they bleed, and it is often associated with clots and flooding outside of the pad, tiredness, and has a significant impact on their quality of life.

If you experience a change in the pattern of your bleeding, bleeding that occurs in between your regular periods, bleeding that lasts longer than seven days, or heavy bleeding over the age of 40, along with any other symptoms like tiredness, palpitations, a feeling of fullness in your tummy, or pressure down below, you should visit your GP to discuss your symptoms and see if a referral to a gynaecologist for investigations is needed.

The management of heavy menstrual bleeding includes assessment of the need for a biopsy of the lining of the womb, tablets to reduce bleeding (such as tranexamic acid), hormone tablets such as a strong progesterone or combined oral contraceptive pill, and management of the causes of heavy bleeding. This could involve a process to thin the lining of the womb, removal of fibroids, or removal of the womb in some women, particularly those who don’t want (any more) children and for whom their bleeding is debilitating.

The Mirena coil and heavy periods

The levonorgestrel intrauterine system (IUS), which goes by the trade name Mirena, has revolutionised the management of heavy menstrual bleeding. It has provided such good symptom control that it has drastically reduced number of women needing surgery to manage their symptoms. So, in short, the Mirena can and does help with heavy bleeding in many women: it helps reduce bleeding in the majority of women and one of its primary uses is to reduce heavy bleeding.

What is the Mirena?

The Mirena IUS releases small amounts of levonorgestrel (synthetic progestogen) locally into your uterus. It is a T-shaped device about an inch long, made of soft, flexible plastic, that can be placed into your uterus via the vagina by a healthcare provider during a visit to the clinic. It can be used whether or not you have had a child, and can be inserted at any point in the menstrual cycle as long as you aren’t pregnant or at risk of pregnancy.2

The levonorgestrel intrauterine system (IUS), which goes by the trade name ‘Mirena’, has revolutionised the management of heavy menstrual bleeding

The device is coated in levonorgestrel and releases microscopic amounts (20 micrograms a day) to act directly on your endometrial lining for five years, after which it is advised that it is replaced. It prevents pregnancy by thickening cervical mucus to prevent sperm from entering your uterus, and by thinning the lining of your womb. In a few women it may also prevent ovulation, but this is not the primary way in which it acts as a contraceptive, and nor is it the purpose of the device.

The Mirena has been proven to be 99% effective at preventing pregnancy,3 and has the advantage of being easily reversible: if you visit your doctor or sexual health clinic the coil can be removed, with minimal discomfort.

How does the Mirena act on heavy periods?

The Mirena affects heavy periods because the hormone is exposed directly to the endometrial cells lining your womb. The effect of the hormone released locally causes the cells to atrophy4 — instead of growing, multiplying, and having a lining that gets thicker throughout your menstrual cycle until it is shed, the cells don’t grow or only grow a little, keeping your lining really thin.

The majority of women experience irregular bleeding or spotting in the first six months after having an IUS fitted.5,6 One in five women will have no bleeding at all after one year of insertion,7 with nine out of 10 women reporting a significant reduction in the amount of bleeding they experience,8 which compares very favourably when looking at other treatments. For example, the mean reduction in menstrual bleeding after four cycles was 47% when using tranexamic acid, compared with an 83% reduction after three months of using the Mirena.9 Most women with the Mirena report that they bleed or spot for around four days a month by the time it has been in for one year.10

With a locally-released hormone you would not expect to have the same side effects as swallowing a hormone-based pill (such as acne, breast tenderness, mood changes, headache, or nausea) as the absorption of the hormone is local rather than systemic (such as with the progesterone only pill, for example). However, there are a couple of other side effects you may wish to consider.

Potential side effects of the Mirena

When the IUS is inserted, there is a risk that it may perforate the top of the womb. The level of risk depends on when it is being inserted and your overall medical history, and your doctor will advise you if the risk for you is low or high. If you are considered to be high risk then you will be advised to have the coil inserted in theatre, instead of having a GP insert it in clinic.

Infection is a risk, particularly pelvic inflammatory disease (PID) in women who have an undiagnosed infection or high risk behaviour for acquiring a sexually transmitted disease. Some women with an IUS (12 out of 100) may develop small ovarian cysts. The majority of these will not cause any symptoms and will go away by themselves within three months.12

An intrauterine system is not suitable if you are pregnant and cannot be used as an emergency contraceptive. It cannot be placed if you have an untreated or recent (within the last three months) pelvic infection, and it is not advised if your immune system is compromised, if you have or suspect you might have, cancer of the uterus or cervix, have liver disease or a liver tumour, or have breast cancer or any other cancer that is sensitive to hormones. This applies both to now and the past.

Finally, some women with a significant difference in their uterine anatomy may not be able to have a Mirena fitted, and you should not have one placed if you are allergic to any of the ingredients that make up an IUS.

However, if you are a valid candidate for the IUS and you have heavy periods that are causing you distress, it is definitely something to consider as there is considerable support for it as a means of treating heavy bleeding. A sexual health practitioner at your local clinic will be able to advise you further, and book you in to have one fitted.

Featured image is of a woman sitting cross-legged on the floor, with her arms resting on her legs. Her right hand is gripping her left arm, as if nervous or lost in thought. The image is cropped and she is visible only from the lower torso downwards

Author’s disclaimer: This content is designed to provide general information and is not a substitute for medical advice. Medical opinion, practice and routine may vary from country to country and may change from time to time. The author is not liable for the results of misuse or inappropriate application of the information. If you are an individual who chooses to access this information, you should not rely on the information as professional medical advice or use it to replace any relationship with your doctor or other qualified healthcare or social care professional. For medical concerns, including decisions about medications and other treatments, individuals should always consult their doctor or, in serious cases, seek immediate assistance from emergency personnel. Individuals with any type of medical condition are specifically cautioned to seek professional medical advice before beginning any sort of health treatment. Individuals with specific queries or concerns should seek appropriately qualified medical advice. Clinicians must use their own judgement when interpreting this information and deciding how best to apply it to the treatment of patients. 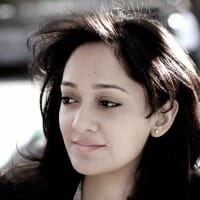 Natasha is senior clinical fellow in Obstetrics & Gynaecology with the Chelsea & Westminster NHS foundation trust. She was previously a clinical research fellow at the University of Oxford and national women’s health lead for the Muslim Doctors Association of the UK. Her special interests include the use of digital healthcare solutions to help vulnerable populations of women, volunteer work with refugees, and chasing that last sliver of sun on her balcony after work.